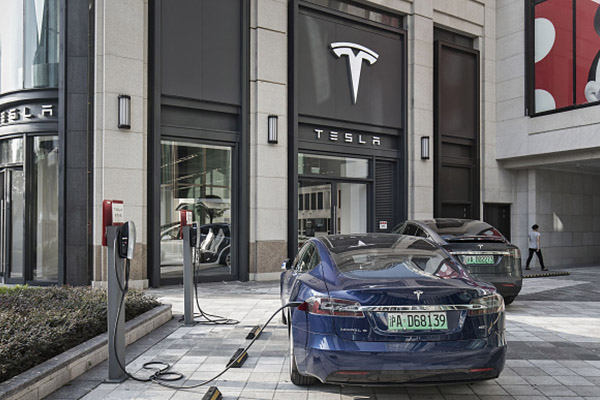 US stock futures showed some signs of recovery on Monday, but as the markets opened the week on Tuesday, the benchmark indexes plunged further into correction territory. Nasdaq was the worst performer as tech stocks dragged the index down. It fell 4.11% during the session and almost 10% from its recent record high. Investors dumped tech stocks after an impressive rally that pushed the tech-oriented index higher by 70% from the March low.

The S&P 500 declined 2.25%, and Dow Jones dropped 2.78%. All eleven sectors making the S&P index were in red, dragged down by energy, financial, and information technology shares.

Tesla tumbled over 15% to the lowest level in three weeks, as the electric vehicle maker wasn’t among the three new companies added recently to the S&P 500. Still, Tesla’s share price almost quadrupled since the beginning of the year.

At their lows on Tuesday, Apple, Amazon, Facebook, Alphabet, Microsoft, Tesla, and Netflix had lost over $1 trillion in combined market capitalization since September 2.

The correction might have been triggered by fears that institutional investors bought call options in excess during the second quarter.

JPMorgan Chase dropped 3% on reports that it was investigating employees who were allegedly misusing funds planned for coronavirus relief.

Boeing fell 4% as investors found out that the US aviation authority initiated an investigation into manufacturing flaws in the Boeing 787.

Asian stocks are also flashing red on Wednesday, following the US tech selloff.

At the time of writing, the Shanghai Composite is down 1.07%, and the Shenzhen Component has tumbled 2.21%.

Earlier today, China reported on its consumer price index and producer price index for August, which rose 2.4% and fell 2%, respectively y/y, in line with analysts’ expectations.

The bearish trend might also have to do with the sudden halt of COVID-19 vaccine trials by AstraZeneca, which is developing it with the University of Oxford. The frontrunner candidate gave hopes that the vaccine could put an end to the pandemic. The pause is caused by an adverse reaction.

Hong Kong’s Hang Seng Index is down 0.98%. The government said yesterday that it would further ease lockdown measures.

South Korea’s KOSPI has declined by 0.66%, though the index is departing from session lows. Official data released earlier Wednesday showed a surprising decline in unemployment for a third consecutive month, despite more severe social distancing measures introduced in the country after the number of coronavirus cases started to increase. Still, while the unemployment rate fell to 3.2% from July’s 4.2%, the overall employment fell for a sixth consecutive month.

European futures are mixed as of now, with German DAX staying resilient against bears.

In the commodity market, oil prices can’t find their support as investors concerned about a second wave of the pandemic. Brent has dropped 0.53% to break below $40 for the first time since June. WTI futures are down 0.65% to $36.52.

The number of confirmed COVID-19 cases continues to increase in India, the UK, Spain, and many US states, and globally.

In FX, the US dollar and Japanese yen are benefitting from the tech selloff. The US Dollar Index, which tracks the American currency against six other currencies, edged up 0.04% to 93.490. Investors are also waiting for the European Central Bank (ECB) meeting tomorrow. The ECB has previously hinted that the bloc’s currency was too strong for its monetary policy.

Elsewhere, the British pound continues to decline amid increasing fears of a no-deal withdrawal from the European bloc. GBP/USD fell below 1.30 to the lowest since July. UK Prime Minister Boris Johnson said that Britain would accept a no-deal Brexit if negotiations make no progress by mid-October.